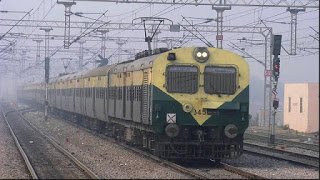 Ministry of Railway announced that Railway decided to install ✅ Tri-Netra systems on locomotives for enhancing the vision of Locomotive pilots or Loco pilots in inclement weather. The third eye or ‘Tri-Netra’ that the Indian Railways is getting, will help in averting train collisions, derailment and accidents on unmanned railway crossings. India will be the first country to use this technology in railways for monitoring obstructions on tracks to prevent mishaps, claims Indian Railways.

TRI-NETRA stands for – Terrain Imaging for Diesel Drivers Infra-red, Enhanced Optical and Radar Assisted System. TRI-NETRA system shall be made up of high-resolution optical video camera, high sensitivity infra-red video camera and additionally a radar-based terrain mapping system.  These three components of the system shall act as three eyes (Tri-Netra) of the Locomotive Pilot.

How is it Work?

TRI-NETRA is designed to “see” the terrain ahead of the running locomotive during inclement weather by combining the images captured by the three sub-systems and to create a composite video image which shall be displayed in front of the Loco Pilot on a computer monitor. During fog, heavy rain and also during night, the locomotive pilots face serious challenges in looking out ahead to spot any obstruction on the track such as vehicles which get stuck while crossing the track or trees or boulders which have fallen across the track etc. Because of the heavy momentum of the running train, the train driver has to always adjust the speed of the train such that he or she can stop the train on visually seeing the obstruction. In fair weather and in daytime, this is not a problem since train driver has a clear view of the track ahead. But in poor visibility, he has to reduce the speed suitably so that the brakes can be applied in time to stop the train without hitting the obstructions. This is where TRI-NETRA will come into picture and give the locomotive pilot a clear view of the track ahead in bad visibility conditions so that he can apply brakes well in time. Conversely, he can speed up the train even in poor visibility if the TRI-NETRA system shows that the track ahead is clear of obstruction. The system shall also map the terrain ahead so that the driver knows when he is approaching a station or a signal.

How to Develop this?

The concept of TRI-NETRA was developed by Development Cell under the guidance of Member Mechanical, Railway Board while brainstorming on how to use the technology employed by fighter aircrafts to see through clouds and operate in pitch darkness and the technology used by naval ships in mapping the ocean floor and navigating in the night. Such an “assisted vision” system is not available readily in any of the advanced railway systems but the manufacturers and technology partners who develop components of such systems for defense are very excited with the concept. “Such systems have not been used for peacetime applications and we are excited that Indian Railways have thrown such a challenge at us” said one of the foreign specialists who develops such systems for fighter aircrafts. There has been very enthusiastic response to this Expression of Interest (EoI) published by Railway Board and number of companies from Israel, Finland, USA and Austria have expressed interest in developing such a system.