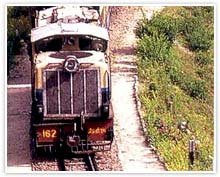 The newly carved West Central Railway Zone with its headquarters at Jabalpur comprises of Jabalpur and Bhopal divisions of erstwhile Central Railway and Kota division of erstwhile Western Railway. The formal gazette notification announcing the formation of this new zonal railway was issued on 4th July 2002 by the Ministry of Railway, Govt. of India.

The territorial jurisdiction of West Central Railway stretches from Khandwa excluding to Manikpur (excluding on the Mumbai-Howrah route via Itarsi- Jabalpur in the west east direction and from Mathura (excluding to Nagda (excluding on Delhi-Mumbai route via Ratlam forming a part of one of the important diagonal and side of golden quadrilateral of Indian Railways. In the north-south direction the zone has Bina (Including)-Bhopal-Itarsi (Including section of Delhi- Chennai trunk route. In addition important freight corridor of New Kati On-Line and branch line sections of Katni-Singrauli, Satna-Rewa, Jukehi-Kymore, Bina-Guna-Kota, Kota- Chanderiya (excluding) and Maksi (excluding Guna-Gwalior (excluding are also within the jurisdiction of this new zonal railway-West Central Railway caters to 39 districts (24 of M.P.13 of Rajasthan and 2 of U. P.). It has a total route kilometers of 2911 kms. of which 1328 route kms. are electrified.

Important stations served by this railway include Jabalpur, Bhopal, Kota, Habibganj, Itarsi, Bina, Vidisha, Ganjbasoda, Hoshangabad, Harda, Guna, Katni, Satna, Saugor, Maihar, Narsinghpur, Madanmahal, Pipariya, Damoh, Sawai Madhopur, Gangapur city, Bharatpur, Ramganj Mandi, Baran, Chau Mahla, Shri Mahavirji etc. West Central Railway has a fair balance of passenger and freight traffic. On the freight side the most important originating traffic is of cement which is loaded in Satna-Rewa cluster of Jabalpur division. Lakheri, Dadhdevi, Morak stations of Kota division. Other originating commodities handled include bauxite, limestone, dolomite and clinker on Jabalpur division, LPG and POL on Bhopal division fertifilizer on Kota and Bhopal divisions, deoiled cake on Bhopal and Jabalpur divisions and food grain on Bhopal division. The daily average loading of this Railway is about 2200 four wheeler wagons, the annual originating revenue earning loading is approximately 19 million tones whereas the originating annual goods earning is approximate rupees. 857.51 crores. On the passenger side this railway deals with 254 no. of mail express and 74 no of passenger trains including 16 pair of Rajdhani/Shatabdi trains and 4 pair of Jan-Shatabdi trains. Approx. 75 million passengers originate their journey every year on this railway giving a passenger earning of approx. Rs. 386 crores. After accounting for other coaching earnings including parcel traffic of Rs. 25.64 crores the overall total annual earning of this railway comes to approx Rs. 1269 crores.

West Central Railway has two major marshalling yards at New Katni Jn. And Itarsi Jn. It also has three electric loco sheds at New Katni, Itarsi and Tuglakabad with a total fleet of 349 electric locomotives and two diesel loco sheds at New katni and Itarsi with a total fleet of 349 diesel locomotives to keep the traffic moving on its routes, To keep the fleet of nearly 700 locomotives in good fettle all the time is a mammoth task and a challenge which is successfully met by this railway. In addition there is a coach repair workshop at Bhopal and a wagon workshop at Kota which are engaged in the activity of heavy repairs to passenger coaches and POH of goods wagons especially of oil tank wagons.

This railway has a total officers and staff strength of 65477 who are responsible to ensure that the wheel of the rail is always moving. They work round the clock with sincerity and devotion to fulfill the aspirations of people from Harot to Mahakoshal and from Malwa to Bundelkhand. If you are fond of the call of jungle then W. C. Railway promises to take you to national reserve forests of Kanha-Kisli, Bandhavgrh, Ranthambore, and Shivpur and bird sanctuary of bharatpur. If you wish to enjoy the scenic beauty of hills then visit Pachmarhi. If you have interest in historical monuments then plan your trip of Khajuraho, Sanchi or Bhimbetka. If you are religious minded you may like to pay homage at Maa Sharda Devi Temple at Maihar, Shri Raj Rajeshwari temple at Shridham, Mahdev Temple near Bandakpur, jain temple at shri Mahavirji or Birla Temple at Bhopal or Nagda. For leisure tourism one may think of pleasant boating between marble rocks near Jabalpur or visit Kota and bundi forts.

The officers and staff of West Central Railway are resolved to fulfill the aspiration of people through their dedicated effort and team work and are committed to lead this railway in the pursuit of excellence through modernization and economy.