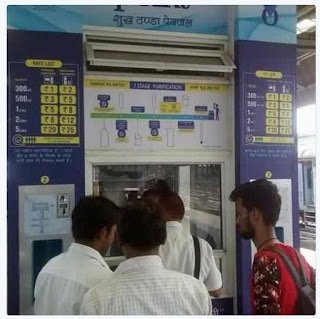 Indian Railway is installing various water vending machines / Water ATM across various Railway stations in India for giving good and hygienic drinking water to the passengers. It is very help full to the passengers because the rate of this water is low compared to other bottle water. Water Vending Machines can be installed only in stand alone mode by reputed manufactures or their franchisee holders or authorised agents at stations.

Commuters without a container are charging

Updated : 03.08.2016 Indian Railway decided to install more Water Vending Machines in Railway Stations for the comfort and convenience of the passengers.  In a move to improve the passenger amenities railway will install total of  270 Water ATM in stations in this August.

Updated : 02.08.2016
Indian Railway launched new initiative called Water Vending Machines for the aim of Making Drinking Water Available at Railway Stations. Water ATM is a unique initiative to deliver pure, chilled water to passengers at a very low cost.It is Railways’ endeavor to provide drinking water at all stations on Indian Railways. As such, eight stations viz. Bhopal, Dwarka, Gadag, Guwahati, Hazrat Nizamuddin, Madurai, Patna and Tirupati stations have been identified for provision of RO drinking water units on experimental basis. Further, 346 Water Vending Machines have been provided at stations.  Indian Railway installed 300 water ATM across 18 divisions, 60 stations. 1200 stations are identified, 3000 water ATM planned for installation. 500 to be earmarked for self help groups. It will generate employment and will reduce environment pollution by reducing consumption of plastic bottles. Railway is planning for 8500 Water Vending Machines and will cover all the station.