Waiting rooms are available at major stations for use by genuine passengers. These can be ✅ used free of cost on the production of journey tickets for a few hours till the connecting train arrives. Till departure train comes. This logic is somewhat similar to airport waiting systems. If the passenger wants to stay, Railway arranged Retiring Rooms in Railway Stations. For the passengers, IRCTC opens a world-class Executive Lounge (private waiting Area) also at the Railway Stations.

5374 numbers of stations have waiting rooms/halls over Indian Railways, Railway announced via press release on 30.07.2021. In the rest of the stations, seating arrangements are provided in the concourse/ticket booking area. Waiting rooms/halls are included in Minimum Essential Amenities, which are ensured at all categories of railway stations except Suburban Stations (SG) and Halt Station-3 (HG-3) stations. Upgradation/modernization of railway stations including waiting rooms/halls on Indian Railways is a continuous and ongoing process, however, priority is accorded to a higher category of stations over the lower category of stations while sanctioning and executing the works depending upon need, the volume of passenger traffic and availability of funds.

There are 3 types of Waiting Rooms

The lower class and ladies are non AC but the upper class is AC. The upper class is for 3A/2A/1A/EC/CC passengers and non-AC rooms are for SL/2S passengers having confirmed or RAC tickets. There is a toilet usually in most waiting rooms but no shower facility.

Waiting Rooms are present at all major railway stations in India mostly on Platform no. 1 or on the terminus side. They are for short term duration use and are free. They are for passengers waiting for departure (outbound trains) and not for arrival. They provide limited seating areas for passengers waiting to catch a train and so no reservations are allowed and seating is first come first served.

If the train is late and you are not getting the waiting room you can ask for help to railway police and stay in the waiting room or a station in the permission of the Railway Officer, in that time no restriction for time.

Details of Waiting Rooms in different Railway Stations in India

The opening of Second Class Waiting Halls at Mugma, Chhota Ambona and Kalubathan stations, provided with state-of-the-art interior décor and modern fittings, will provide cozy accommodation for the passengers while waiting at the stations. With these, long pending demands of passengers of those stations have been fulfilled. VIP Rest Room at Kumardubi Station is equipped with plush sofa chairs where passengers can comfortably relax or take short nap in a spacious and pleasant ambience.

Shri Pashupati Nath Singh, Hon’ble MP, expressed his satisfaction o­n the arrangements made in these Second Class Waiting Halls at Mugma, Chhota Ambona and Kalubathan stations provided with sufficient sitting arrangements, toilets for ladies and gents, fan and lighting arrangements which will provide more comfort for the commuters. A tree plantation programme was also organised at North side of Kumardubi station beside platform No. 2 where Hon’ble MP, DRM and other officials participated in tree plantation.

General Waiting Hall at Platform 1 of Secunderabad Railway station now has the facility of DAWA DOST – where passengers can avail 24×7 Physician Doctor consultation and essential medicines at a nominal price. 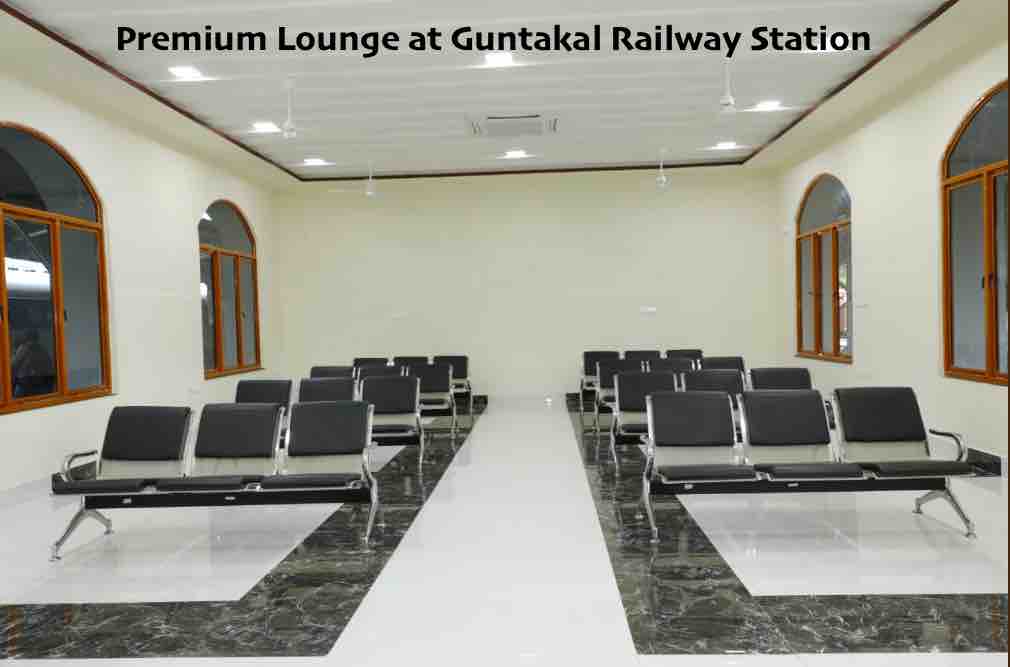 IRCTC lounge in Kalupur (Ahmedabad) railway station is available for ₹ 60 per hour. AC sitting, wi-fi, toilet, and charging port are available over there.

At Kollam station the Waiting Room facility is manned by Kudumbashree and the hall has a seating capacity of 40. A mini library, TV, washrooms and a kids play zone are additional features of these AC waiting hall. A reasonable entry fee of ₹ 25/hour is charged.

Two upper class AC waiting halls have been made available at New Delhi Railway Station, one each on Paharganj and Ajmeri Gate side. Passengers can avail the facility by paying a Nominal charge of ₹ 10/hr per person.

Besides the choice of refreshments, Modern Steel Chairs are available in the Integrated Waiting Hall. The state-of-the-art Integrated Waiting Hall is the o­nly of its kind in Sambalpur Railway Division where passengers can get relax during waiting for their trains with the option to munch o­n snacks, chocolates, and other food items or sip tea, coffee, and juice. Apart from the above, the well-furnished Integrated Waiting Hall has been given the look of local Arts and Culture having Divyang Friendly facilities.

AC Paid waiting room at Trivandrum Central with a seating capacity of 48 passengers has been set up in association with Kudumbashree, an all-women Self Help Group under Govt. of Kerala.A reasonable entry fee of ✅ ₹ 25/hour is charged.

First time in Indian Railways a gaming zone has been developed at PF No.1 of Vishakhapatnam Railway Station for waiting passengers and their children. This is an innovative initiative by Waltair Division.