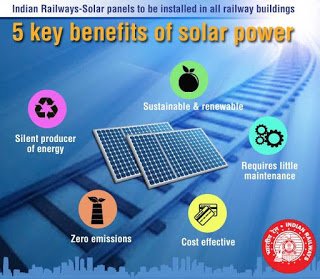 Indian Railway decided to launch many passenger amenities in the Railway stations as pat of modernization and revamping of Stations and Station premises. The new initiatives among this are installation of solar panels in the railway stations. Following are the details of Solar Power in Indian Railway.
Indian Railway decided to use solar power as an alternate Sources of Energy in Railway Stations and Railway started to install solar panels in all Railway buildings. There are many benefits for using solar power.

Following are some details related to this.

Indian Railways proposes to harness 1000 Mega Watt (MW) solar power by 2020. As part of this, about 500 MW solar plants are planned on rooftop and about 500 MW through land mounted panels.
Indian Railways proposes to harness about 150 MW wind energy, by itself or through Railway Energy Management Company Limited (REMCL).
Vision 2020 Document provides for Indian Railways sourcing of at least 10% of electricity used from renewable energy sources. A total of about 50 MW renewable energy capacity has been installed till date, including approximately 13 MW solar and 37 MW wind plants.

Indian Railways planning to use Solar Energy in Trains to run the AC’s as well as other electrical equipment’s. For creating the Solar Powered train design Indian Railways made tie up with IIM Madras. This project considered to be most challenging job as Indian trains are running various areas with different climate. 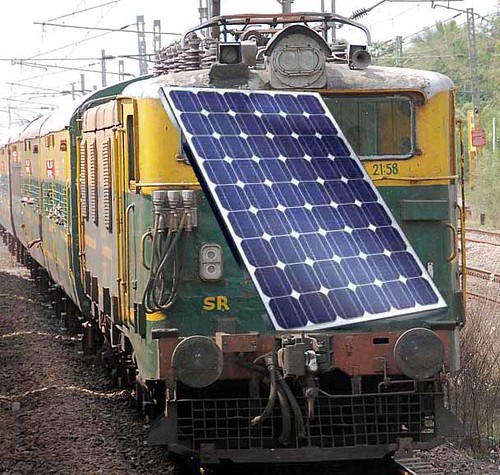 Once the project got success Indian Rail planning implement all over India to Save Energy.  This will avoid existing Diesel as well as other resources cost.  However the projects end time not yet announced.  Existing AC compartments trouble with Battery system several times. So once the Solar power Trains get start running Indian railways expecting to save as Energy as well reduce pollution aspects.