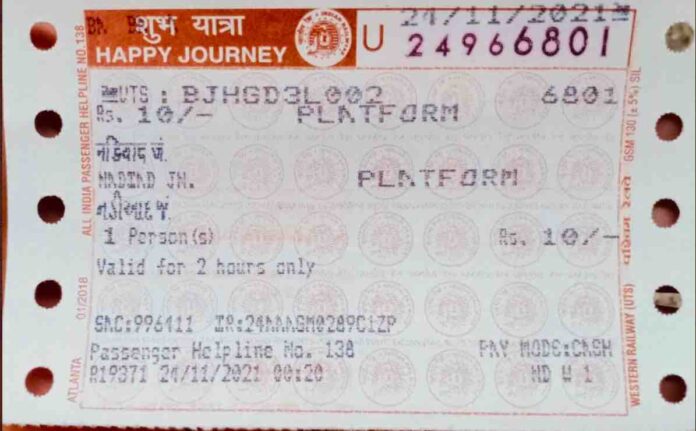 Railway Platform tickets: Persons other than bona fide passengers seeking entry to station platforms for the purpose of receiving or seeing off friends and relatives, should be issued platform tickets, were stocked, on recovery of the prescribed charges.

Indian Railway announced (on 04.11.2022) that power delegated to Divisional Railway Managers to decide rate of platform tickets shall be treated as withdrawn with immediate effect. But other terms and condition shall continue as earlier.

While booking platform ticket person should be in and around 25 to 40 m from station premises as the app is geo- fenced to avoid cheating railways. So make sure you book the ticket before reaching the station. Suburban train tickets can also be booked through this app. Details attached :- UTS Mobile Ticketing App

Use Automatic Ticket Vending Machines (ATVMs) extensively for ease of ticketing. Payment towards ticket fare is facilitated through new UPI-QR code based payment feature in ATVMs. Unreserved & PF tickets can be purchased in minutes thru ATVMs – Season tickets can be renewed

Now passengers can purchase platform tickets at the major railway stations without stepping into the booking office anymore. It plans to facilitate booking using QR code at kiosks as part of its modernization efforts, which also has the added advantage of avoiding personal interface in Covid 19 time.

A big move in the offing is that platform tickets can be booked through these kiosks which will have a QR code displayed on them. “One just needs to bring along a mobile, scan the code and collect the ticket from the slit below. There will be no human interface.

Indian Railway announced (on 04.11.2022) that power delegated to Divisional Railway Managers to decide rate of platform tickets shall be treated as withdrawn with immediate effect. But other terms and condition shall continue as earlier.

Southern Railway announced on 20.06.2022 that in view of the proposed Bharat Bandh & to safeguard the safety & security of passengers, the issue of Platform tickets is restricted at all Railway stations over Chennai division of Southern Railway, until further orders. Passengers and the general public are requested to kindly co-operate with Railways in upholding the safety of rail users and Railway property.

Mumbai Division of Central Railway has decided to roll back the platform ticket fare from Rs 50/- to Rs 10/- at Chhatrpati Shivaji Maharaj Terminus, Dadar, Lokmanya Tilak Terminus, Thane, Kalyan and Panvel stations with immediate effect. The price was hiked to avoid unnecessary crowd at stations in view of Covid-19 pandemic. Now the decision to revert back the platform ticket price has been taken in the light of the easing of restrictions imposed due to Covid-19 pandemic.

Western Railway announced that Rate of platform ticket has been regularised at Rs 10 per ticket for suburban & non suburban stations of Mumbai Division of WR with immediate effect. Passengers are required to follow health protocol & the current guidelines regarding Covid-19.

Central Railway announced that Railway administration has decided to restart the issue of platform tickets with effect from 08.10.2021 till further advice at CSMT, LTT, Kalyan, Thane, Dadar and Panvel stations of Mumbai Division due to festival season. However, the platform ticket will be issued at above mentioned stations at ₹50/- to curb the excessive rush at platforms / stations / concourses and terminus during the festive season.

South Central Railway announced on 28.07.2021 vis press release that the Platform Ticket rates, which were temporarily increased as a precautionary measure against Covid-19, have been revised downwards at all railway stations of Secunderabad Division of South Central Railway. The issue of Platform tickets, now, has been resumed at all stations of Secunderabad Division including small stations, which was stopped earlier. This decision has been taken in view of the resumption of Unreserved Express trains over the rail network.

The decreased platform ticket fares at all railway stations (both Non-Suburban and Suburban Stations) of Secunderabad Division will be Rs.10/- (Rupees Ten o­nly ) except for Secunderabad & Hyderbad stations, where it will be Rs 20/- (Rupees Twenty o­nly ).

The issue of Platform tickets will facilitate to a large extent, all the rail passengers, especially Senior Citizens and Divyangajan in smooth boarding and alighting the trains. The precautionary measures being taken o­n railways to tackle Corona Virus will be maintained as usual. Rail users are requested to co-operate in this endeavor and follow all the protocols laid down in containing Covid-19.

Southern Railway announced that following the demands from rail users, the Chennai Division of Southern Railway permitted the issue of platform tickets at select six major stations from 17.03.2021 to 15.06.2021. The issue of platform tickets with the enhanced cost is now further extended till 16.09.2021. It has now been decided by the railway administration to continue the issuing of enhanced cost of platform ticket at Rs.50/- per ticket at all the 6 major stations in Chennai Division, namely, Dr. M.G.R Chennai Central, Chennai Egmore, Tambaram, Chengalpattu, Arakkonam and Katpadi stations till 16.09.2021. The platform tickets with enhanced rates ie. Rs.50/- per passenger are issued as a temporary measure undertaken by a railway administration to restrict overcrowding and movement of passengers at railway stations, as the lockdown due to COVID pandemic has not been lifted completely. The platform tickets are issued only for the benefit of sick, differently-abled, and aged passengers who need help in boarding and deboarding. This extended sale of platform ticket will be in force from 17.06.2021 till 16.09.2021

COVID-19 : Railway to limit entry/exit points at stations in Mumbai

The Railways will limit the number of entry and exit points at stations in Mumbai to prevent unauthorized people from traveling in local trains, as the Maharashtra government’s new COVID-19 curbs come into force from Thursday (22.04.2021) night, an official said., a famous online newspaper reported.

As per the guidelines under the state government’s “Break the Chain” order, only government servants, medical personnel, people requiring medical treatment, and specially-abled persons will be permitted to travel in local trains starting 8 pm on Thursday till 7 am on May 1.

According to officials, even train tickets and passes will be issued only to those whom the state government has authorized to travel on local trains. “We have already instructed the staff at railway stations about the new guidelines of the state government,” Central Railway’s chief public relations officer Shivaji Sutar said. Train tickets will only be issued at ticket counters and all other modes of bookings like ATVMs, JTBS (Jan Sadharan Ticket Booking Seva) and UTS will remain disabled till future orders, the official said.

The Railway Protection Force (RPF) with the help of the Government Railway Police (GRP) and the Mumbai police have already started to limit the number of entry and exit points, Western Railway’s chief public relations officer Sumit Thakur said. Personnel from the RPF, GRP, and ticket-checking staff will check the identity cards at entry points before allowing people to enter the stations, railway officials said. “We are going to follow the new guidelines. The state government has permitted three categories of people to travel on local trains. Only people with valid identity cards will be allowed to travel in local trains,” Thakur said. Travelers boarding or alighting from outstation trains will also not be permitted to travel in local trains, as the state government’s order has not mentioned it, officials said.