Be Safe Awareness Drive by RPF

As part of safe journey awareness campaign Central railway and Western Railway are inviting feed back from Railway passengers for stopping accidental deaths in Mumbai suburban system. Passengers can mark their feed back in the Feedback form that is available in online, or be able to send suggestion via email. Be Safe Awareness drive by RPF in Western and Central Railway details are following. 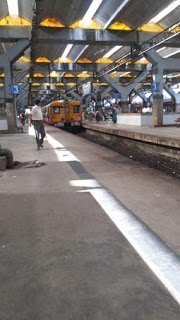 ety strategy
against mischievous activities. They already covered 14 stations.  The campaign aim is to propagate certain basic ideas to keep yourself safe and keep your fellow travelers out of harm.  So with these basic measures women can ensure their safety while in the station or at the time of train journey.
Let’s check the advice of Railway Protection Force.

Following are vulnerable sports on the western line, as they are overly exposed to drug addicts and other fringe elements.

If you or your fellow passenger are in trouble while travelling via train now you can send
message through WhatsApp Helpline number. The number is 9004499718. You can send
pictures of the situation also to this number.  So no need to waste your time. We can inform the railway officials through above number if we see a child unaccompanied of somebody travelling with a child in a suspicious situation.

Don’t betray fear when you smell trouble, try to team up with fellow passengers and overpower the attacker.

Don’t lazy to lodge a complaint in the police station within 30 days of the incident. Because
CCTV cameras will store the details only for 30 days.

Activate the GPS features of the smart phone while travelling, for easy identification of your
location by RPF officials.

Keep an eye out for drunkards and druggies. Inform the authorities are vita.

Get the devil out of the details, so you can easily explain the detail of the wrongdoer to
the authorities. During the peak hours only CCTV details are not enough for identifying
the attacker.

Know which station the train has crossed and which is the next station, Know in which
coach you are travelling so be alert while travelling.

Other Activities of Be Safe Campaign

In 2014 itself  Western Railway launched a part of Be Safe campaign in collaboration with
corporate under corporate Social Responsibilities to spread awareness  about safe travel in train passengers. For this various stations had been selected. The Campaign started from Churchagate Station on 29/01/2014. After Churchagate the campaign were held in other
stations such as Dadar, Jogeshwari, Kandivali, Borivali etc.

The campaign main aim was to educated commuters to avoid unsafe travel practices like
catching a running train, crossing tracks in hurry even though next  train in few minutes or foot over bridge to cross track. Under its initiatives to educate commuters about safe travel, Western Railway has launched an extensive campaign of publicity through print media, radio spots through FM channels etc. Public Announcement System at station was also being extensively used to relay radio spots to warning people about dangers of unsafe
travel.

Bagasse Based Food Packaging by IRCTC