Leading real estate player, Mantri Developer on Monday announced the opening of one of India’s largest mall, Mantri Square, spread over 1.7 million square feet and which would soon have a metro connectivity as well.With an investment of over Rs. 500 crore, the mall boasts of 252 retail outlets offering 10,000 brands, Sushil Mantri, Chairman and Managing Director, Mantri Developers told media.

The highlight of the mall would be its connectivity to railway station which is being jointly developed by the metro rail authorities and Mantri developers on five acres of land belonging to Mantri and leased out to the government. 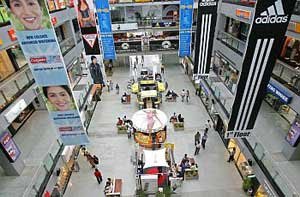 A bridge would lead the commuters getting off at the station to the second floor of the mall, providing shoppers an international experience, he said.

The station is expected to provide an additional footfall of 20,000 once it becomes operational in two years time frame.

The developers expect the footfall to go up to one lakh a day once the station was operational.

The station area would cover around 80,000 sq feet and would involve third party maintenance, he said.

The mall will have the largest food court and dining area in Bangalore with 39 food and beverage outlets. It would host six anchor stores with Spar Hypermarket with its largest outlet in India at 90,00 sq feet housed here apart from Inox multiplex with 1497 seating capacity, Mr. Sushil said.

The revenue was on a sharing basis on a tenant to tenant basis. The expected retail turnover for the mall was expected to be around Rs. 700 crore in a year’s time.

In the backdrop of some accidental falls in other popular malls and recent Carlton blaze, the mall had in place all safety measures including fire hydrants, emergency exits, ambulance service, fire sprinklers, smoke detectors.

The mall has exit staircases and during emergencies and escalators and elevators to provide free movement.