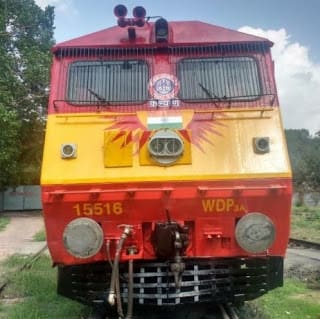 IRCTC has introduced lucky draw for the journeys of Tejas Express between August 27, 2021 to September 6, 2021. Passengers in both the classes, Executive AC Chair Car and AC Chair Car will get these surprises during their journey. One surprise gift will be given per PNR drawn in this lucky draw. IRCTC is all set to welcome passengers on board its Tejas Express train on the Ahmedabad – Mumbai – Ahmedabad route.

IRCTC announced that “Kindly communicate with Liberty General Insurance Company for processing your Travel insurance claim (IRCTC Tejas Exp.) on email id irctc@libertyinsurance.in or call on 18002665844 on or before 30-Oct-2020″. For a list of Outstanding claims, Click here.

Union Railway Minister Piyush Goyal on Gandhi Jayanti unveiled the first batch of indigenously manufactured Tejas Express locomotive for ‘push-pull’ operations. In a tweet, Piyush Goyal said, “these are highly advanced and energy-efficient locos”. The Tejas Express locomotives were unveiled at Asansol Railway station by Union Minister Piyush Goyal. The new locomotives Tejas are equipped with new technology and are manufactured in West Bengal’s Chittaranjan Locomotive Works (CLW). These new-age engines can run at a speed of 160 kilometers per hour.

Ministry of Railways announced that Railway has decided to replace the rake of Agartala – Anand Vihar Terminal Special Rajdhani Express with Tejas Sleeper coaches with upgraded facilities. It will offer better connectivity with National Capital. Provided with smart features, the coaches of this New Sleeper Type Tejas Train will offer the best class travel experience. The start of the Tejas service is planned for 15.02.21. This will offer better connectivity & provide the best the class travel experience and Convenient Travelling for North-East Region.

Tejas is India’s first semi-high speed fully air-conditioned train equipped with 22 new features. The most interesting of which will be high-tech entertainment units, Wi-Fi facility, and integrated braille displays. It will also attempt to provide state-of-the-art facilities including tea and coffee vending machines, magazines, and snack tables. The coaches of the premier Tejas express are being readied in a way to give its passengers a premium travel experience usually associated with European rail travels. Tejas will have Executive Class and Chair Cars, while the Humsafar will be a train which will only have 3-AC coaches populating it. Besides the improved aesthetics, Tejas coaches will come with entertainment screens for each passenger, along with hand phone socket and LED boards for communicating safety instructions, digital destination boards, and electronic passenger reservation chart.

It will also bring with it water level indicators in bio-vacuum toilets, touch-sensitive taps, and hand driers. Both Tejas and Humsafar will also be equipped with CCTVs and fire and smoke detection and suppression systems to ensure passenger safety.

In continuation to the Press Release dated 10/09/2022 regarding “Extension of Train No. 22119 / 22120 Mumbai CSMT- Karmali – Mumbai CSMT ‘Tejas’ Express up to Madgaon Jn.”, the bookings for Vista Dome coach will start from 14/09/2022 at all Passenger Reservation Systems (PRS), internet and IRCTC website.

Konkan Railway announced that Railway has been decided to extend the services of Train No. 22119 / 22120 Mumbai CSMT- Karmali – Mumbai CSMT ‘Tejas’ Express up to Madgaon Jn. with effect from 01/11/2022. Details are as under:

In case the passenger wishes to opt for on-board catering services, service–wise catering charges i.e. Executive class and Chair car on Tejas Trains shall be inbuilt in the ticket fare. If passengers do not opt for catering services at the time of booking the ticket and decides to purchase meals onboard, an extra amount of Rs 50/- per service, in addition to the prescribed catering charges shall be charged subject to availability. However, a charge of Rs 20/- will be included in the fare for all passengers of all classes, since packaged drinking water and newspapers will be provided onboard to every passenger irrespective of their option for onboard meals.

Following are the fare details of Tejas Express Trains.

Konkan Railway published a feedback form for collecting the opinion and suggestion from the passengers. Following are the details. 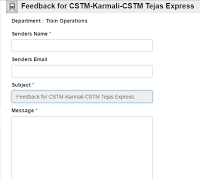 For getting further details about the feedback form please go through the link by Konkan Railway link :- Feedback for CSTM-Karmali-CSTM Tejas Express

Tejas Express, which runs between Chennai Egmore and Madurai had been provided with a ✅ ‘MAGICBOX’ which lets passengers access 500 hours’ worth of entertainment right from their mobiles.

This was done based on o­n passenger feedback who felt a premium train like Tejas should offer entertainment to enhance the joy of traveling. Tejas coaches were initially provided with a Seat-mounted infotainment system which was removed after complaints from travelers about its frequent malfunctioning o­n the run and a railway board instruction to discontinue all seat-mounted infotainment systems. Railway administration had faced problems in updating its software and content.

Wi-fi Entertainment box “MAGIC BOX” is pre-installed with movies, kids content, music, and Government schemes. It has content in regional languages for the multilingual passengers of Indian Railways. Tejas Express which runs 6 days a week, except Thursday, is maintained by GSN Coaching Depot, Chennai.

✅ What is Special in Tejas Express?

✅ How many Tejas Express are running in India?

Food is optional on this train.