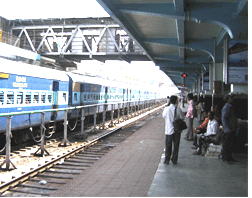 FURTHER DETAILS a.CCTV Surveillance system with IP based cameras around 625 Nos.  b.Under Vehicle Scanning System (UVSS) for 18 entries / exits at 9 major stations. c.Personal and X-ray baggage screening system – 295 Nos. d.Explosive detection and disposal system for bomb detection squads at all major stations. The sub systems will be integrated by networking and monitored at the centralised control rooms.The cameras provided are of SAMSUNG make, IP based and UL certified. .   The number of cameras provided are :

The Security personnel can now view all the nook and corners of the station premises from the Central Control Room to ensure the safety of the Railway passengers and their belongings.