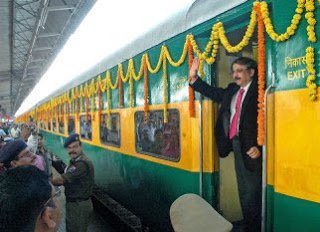 The Garib Rath express train is one of the premier trains introduced by the Indian Railways in 2005 by Railways Minister Lalu Prasad Yadav.

The Garib Rath, whose name means “Poor Man’s Chariot“, was introduced with the facilities of being fully air-conditioned and running faster than most other super-fast express trains running presently.

The maximum speed of Garib Rath trains is 130 km/hr which is the same as Rajdhani’s top speed. However, in Garib Rath trains, passengers are not normally provided with blankets and pillow and they have to pay extra to get those.

Here is the updated Base fare of Garib Rath Express Trains

There are 26 pairs of Garib Rath services operating on Indian Railways. These are very popular services as they facilitate AC travel at fares which are lower than the normal AC-3 tier fares.

Indian Railway announced on 07.11.2022 that Railway has been decided that in the coaches having 9 berther bays, attached in Garib Rath Express trains, no RAC accommodation should be earmarked.

For this passengers are requested to pay Rs.25/- as extra charges per Bedrolls while booking the ticket. Tickets booking through Internet and Reservation Counter avail this option. This option will be effective from January 17th, 2013.