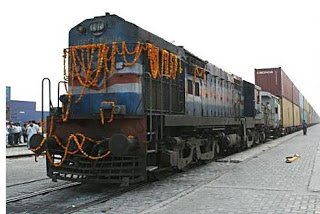 Introduction Of Container Train Services From Chennai To Navi Mumbai

This Chennai-Mumbai Container service is a high-speed weekly service covering a total distance of 1400 kms in 3 days thus enabling seamless flow of container traffic through the coastal areas of South-West. The weekly container train services operated presently would be scaled up to bi-weekly shortly.

With CONCOR strengthening its coastal shipping portfolio, the containers would be transported by sea route from Mumbai to United States. The transhipment of Containers, initially by rail and later by sea transport would significantly boost Exports and bilateral trade with United States and other European Nations.

Chennai Division’s freight indices will witness an upward swing with CONCOR’s rail-based inland haulage. Traders and Logistic providers will benefit from 50 percent concession offered by CONCOR in rail freight besides creating business opportunites and creation of employment in a large scale.

Features : The double stack container trains will be 19 feet high and run on non-electrified/ Diesel routes. The goods that are expected to be carried in these trains will be cars, steel, consumer goods and medicines. So the pollution and road congestion caused by trucks and lorries carrying containers will  decrease.The running of double stack container trains will have several benefits which will ultimately benefit the consumers.
Following are some of the benefits

The goods that are expected to be carried in these trains will be cars, steel, consumer goods and medicines.The running of the double stack container trains on 1198 KM long Gurgaon – Mundra route, will have a positive impact on the environment as the haulage charges will be more competitive than road transport, becoming the preferred mode of transportation for many. Thus pollution and road congestion caused by trucks and lorries carrying containers will also decrease.