Clean My Coach or Coach Mitra Facility in Railway

Clean My Coach’ scheme is an initiative from Indian Railway to ensure cleanliness in trains. For any cleaning requirement in the coach, passenger can send a message through mobile (SMS) on a specified mobile number.  Following are the details of Clean my Coach or Coach Mitra Facility in Railway.

‘Clean My Coach’ scheme, for any cleaning requirement in the coach, passenger can send a message through mobile (SMS) on a specified mobile number. Alternatively, passenger can also use an android app or webpage for logging the request, railway announced through a press release.

‘Clean My Coach’ service is now being upgraded to ‘Coach Mitra’ facility which is a single window interface to register coach related requirements of passengers such as cleaning, disinfection, linen, train lighting, air conditioning and watering of coaches. ‘Coach Mitra’ facility has been introduced in about 800 pairs of trains.

Clean My Coach or Coach Mitra Facility via SMS : Details

On 11.03.2016 Railway Minister Shri Suresh Prabhu launched new Scheme “Clean My Coach through SMS” to provide a solution for calling train cleaner through a three mode platform through video conferencing at a ceremony held at Rail BhawanNew Delhi.
COACH MITRA

One more step towards providing better services to our esteemed Commuters… COACH MITRA…
HELP US TO SERVE YOU BETTER pic.twitter.com/LnrW10LO2f 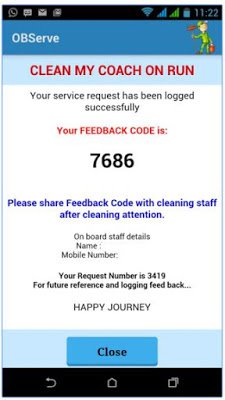 Provides for different types of request like Cleaning, Watering, Pest Control and Linen related request
As announced in the Railway Budget, it is a step to improve the quality  and service of the railway , this scheme is under Swacch Bharat Swacch Rail Mission. Introduction of service ‘Clean My Coach’ on PAN India basis. As a significant step in thus direction, the system of calling on the on board House keeping Service (OBHS) is automated to provide speedier cleaning services. The OBHS includes scheduled cleaning of coaches twice a day and unscheduled cleaning any time on demand of the passenger.
Also Read : IRCTC Mobile Application ~ Download
This service empowers the citizen to get an important service on board and is in line with the objectives of the Digital India Programme launched by Prime Minister of India. Besides, byensuring cleaning of coaches same is also contributing to Mission Swachh Bharat.
Today the “Clean My Coach” scheme launched at New Delhi , Mumbai and Lucknow Junction Railway Stations. This scheme has been tried out on 43 divisions 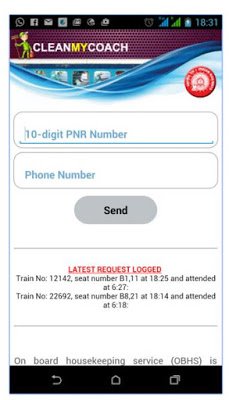 across Indian Railways. For a seamless service it is also planned to cover even those trains which have not been provided with OBHS facility.  In non OBHS trains cleaning, watering etc. as demanded by passenger is being arranged at nearest feasible station. Progressively, trains originating from other 24 divisions shall also be covered in the current year.
MUMBAI
56 Western Railway trains are covered under the Clean My Coach Initiative.Western Railway Trains covered under Clean My Coach Service are given below.
NEW DELHI
Now 68 trains covered on Northern Railway.
LUCKNOW JN.
Under North Eastern Railway and the head office is at Gorakhpur

Features of “Clean My Coach Service” or Coach Mitra Facility

‘Clean My Coach’ is an innovative passenger centric initiative to ensure quick availability of on board services in a train. The OBHS Request Automation System has been developed to facilitate real time on Board Housekeeping Service. The system is primarily a direct requesting service for passengers to use via SMS, for on board cleaning service of train.
As per the scheme, for any cleaning requirement in the coach, passenger sends an SMS indicating his PNR through SMS on 58888, Mobile App freely downloadable from Play Store or on cleanmycoach.com. This is immediately acknowledged along with a code. A message is also sent by the server to the mobile number of OBHS staff travelling on the same train along with the details of the passengers such as coach number, berth number. OBHS staff contacts the passengers, carries out the cleaning work as per demand. If the passenger is satisfied, he discloses the code received during acknowledgement and OBHS staff in turn sends the same code through SMS and the complaint is then treated as closed. If the passenger is not satisfied, he/she doesn’t disclose the code and the complaint is treated as not closed. A three level of reminder SMS shall be generated by the system, if the request is not closed. The system can be assessed using any basic mobile phone. The system, apart from ensuring quick service to the travelling customers, also enables close monitoring of the working of on board cleaning services. Thus, the requests of travelling passengers are quickly addressed using a closed loop, quick response and at the same time through a cost effective system.

The OBHS Request Automation System named OBSERVE (On Board Services, Clean My Coach) will forward the request to mobile phone of the cleaner present in the particular train directly with the details of PNR. The Railway Administration will also simultaneously receive an intimation of such requests for follow up. Passenger can send their feedback in web site cleanmycoach.com.