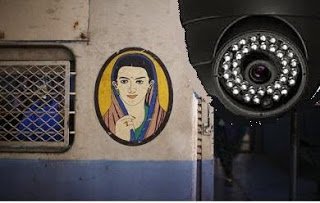 Indian Railway is keen to ensure the safety of passengers in trains and stations. The railway is taking various steps to ensure safety, including installing CCTV cameras in Trains, etc. The following are the details.

CCTV: Closed-circuit television (CCTV), also known as video surveillance, is the use of video cameras to transmit a signal to a specific place, on a limited set of monitors.

Closed Circuit Television (CCTV) cameras have been provided at 686 stations. Online monitoring through Close Circuit Television (CCTV) cameras is done at the Passenger Reservation center as well as other areas of major railway stations. If any unlawful/suspicious activity is observed, immediate action is taken. Presently prevention of entry of persons is not done by using CCTV monitoring. However, surveillance on persons indulging in suspicious /objectionable activities is maintained and intervention is made as and when the need arises. Indian Railway announced via press release on 24.03.2021

DRONE BASED SURVEILLANCE SYSTEM FOR RAILWAY SECURITY BY RAILWAY

A team of four staff of Railway Protection Force (RPF), Mumbai has been trained for drone flying, surveillance and maintenance. These drones are capable of Real Time Tracking, Video Streaming and may be operated on Automatic Fail Safe Mode.

Railway Protection Force (RPF) has planned extensive use of drones for the purpose of Railway security. Nine (09) drones have been procured by RPF so far at a cost of Rs. 31.87 Lakhs at South Eastern Railway, Central Railway, Modern Coaching Factory, Raebareli, and South Western Railway.

It is further proposed to procure seventeen (17) more drones in the future at a cost of Rs. 97.52 Lakhs. Nineteen (19) RPF personnel have so far been trained in the operation and maintenance of drones out of which 4 have received licenses for flying drones. Six (06) more RPF personnel are being trained.

The purpose of the drone deployment is to provide a force multiplier and aid to the effectiveness of the security personnel deployed. It can help in inspection of Railway assets and safety of Yards, Workshops, car sheds, etc. it can be used to launch surveillance on criminal and anti-social activities like gambling, throwing of garbage, hawking, etc in Railway premises. It may be deployed for data collection Analysis of such data collected may prove to be extremely useful in vulnerable sections for safe operations of trains.

The drone may be pressed in service at disaster sites for helping in rescue, recovery, and restoration and coordinating of efforts of various agencies. It is very useful while undertaking mapping of railway assets to assess the encroachments on railway property. During large scale crowd management efforts, it may give vital inputs like crowd magnitude, probable time of arrival, and dispersal based on which crowd regulation efforts may be planned and executed. Drones were used to enforce lockdown and monitor the movement of migrants during the COVID-19 lockdown.

A drone camera can cover a large area that requires 8-10 RPF personnel. Thus, it may lead to substantial improvement in the utilization of scarce manpower. Drone beats have been designed based on railway assets, the sensitivity of the area, the activity of criminals, etc. Drone acts as an “EYE IN THE SKY” and monitors the whole area. Any suspicious activity if noticed is intimated to the nearest RPF post of division to apprehend the criminal LIVE. One such criminal was apprehended on a real-time basis in the Wadibunder Yard area while he was trying to commit theft inside a railway coach stationed in the yard.

The system is under implementation. All India Security Helpline 182 has been made functional through 70 Divisional Security Control Rooms (DSCR) of Railway Protection Force (RPF) of respective Zonal Railways. RPF personnel manning the Security Helpline attend calls and particulars obtained from the passenger are swiftly forwarded to concerned RPF /Government Railway Police (GRP) for rendering necessary security-related assistance to passengers. Security helpline 182 is planned to be upgraded by making it automated, railway announced through a press release on 9th February 2018.

Regarding medical facilities, first aid boxes containing essential drugs and dressing materials are provided with the gurads of all passenger carrying trains. In addition, augmented first aid boxes with a wide range of medicines, disposable medical material, etc. have been provided with the Train Superintendents/ Guards of Rajdhani/ Shatabdi Express trains and some nominated trains. Front line staff deployed on trains are also trained in rendering first aid. The Station Masters of all stations have details of doctors, clinics, and hospitals, both Government and Private, in the vicinity of the station, so that their services could also be availed in emergencies. Ambulance services of both Railway hospitals and State Government are utilized as and when required.

Security has been identified as one of the priority areas by railways for strengthening and up-gradation. 394 railway stations have so far been provided with close circuit television (CCTV) cameras for round the clock surveillance at these stations. All-out efforts are being made in coordination with GRPs of respective States to strengthen security over Railways.

Indian Railway announced in the press release about the coast of Installation of CCTVs in Railway stations and work in progress related to that . Close Circuit Television Cameras (CCTV) have already been provided at 344 stations over Indian Railways. Railways have also planned to install Video Surveillance System (VSS) at 1000 stations under Nirbhaya Fund.

Strengthening and up-gradation of security infrastructure is an ongoing process. Strengthening of CCTV surveillance system at the major stations is being done as per requirement.

Western Railways announced that they are going to installing CCTV (Closed Circuit Televisions) cameras on ladies’ compartments of Mumbai Local Trains for the safety of women passengers. The video surveillance system in ladies coaches is being installed in

three EMU rakes initially. 4 to 8 surveillance cameras are planned in each ladies’ coach to provide maximum coverage of the entire area. The video surveillance system will record all the data in a digital video recorder which will have sufficient capacity to store the data for 30 days. This data can be used by investigating agency, in case of any incidents involving the security of lady commuters. Installed Cameras have 3 Mega Pixel resolutions, with the capacity to shoot all the areas of the Ladies Special compartment.

The video surveillance system will record all the details on DVR with 30 days of data capacity. This video can be used by Intelligence officers when any incidents occur in the Ladies compartment. These cameras are located on the entry and exit of the lady’s special coach with a clear view of each person. These cameras have also the facility to capture the records even there is a shock that occurs due to higher speed. As of now, this feature is going live with pilot only. Once positive feedback received on the railways will extend this facility to other rakes too.

This sudden action of Railway is based on the Delhi incident. It helps to avoid threats and harassment on Trains especially in Ladies Specials. Emergency Push Button is only for Ladies Coaches but CCTV for all General Local Train. One Control Room for CCTVs in trains will be at CST and one recording box is at Motorman Cabin. From the Control Room staff can watch and monitor running trains, and at the time of emergency, Control Room staff can identify the train and catch the train at the very next station. Danish Company, FOCON is studying further details of this application.