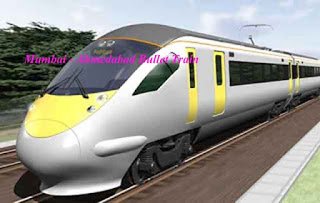 Ministry of Railways have signed Memorandum of Understandings (MoUs) for technical cooperation with various foreign countries railways to get latest technical know-how of the world Railways, and the countries are  France, Germany, Czech Republic, China, South Korea, Canada, Kazakhstan, Slovak Republic, United Kingdom, Japan, Russia and Sweden which includes modernization of rail infrastructure including railway stations. The ongoing cooperation projects through the MoUs signed between Ministry of Railways and foreign countries’ railways are:-

A high-speed train (300 kmph+) has already been sanctioned on Mumbai – Ahmedabad high-speed corridor with financial and technical assistance from Government of Japan. This train is based on Japanese Shinkansen high-speed technology. A company for the implementation of this project with the name “National High-Speed Rail Corporation Limited” has already been formed. In addition to Mumbai – Ahmedabad high-speed corridor, five more corridors covering sides of diamond quadrilaterals and semi diagonals in the country are being explored and Consultants have been appointed to undertake feasibility studies. Following are the name of the High-Speed Corridors.

Trial run of Talgo coaches on existing New Delhi – Mumbai Corridor is an achievement of Indian Railway. These are faster trains which may run at around 200 kmph. Indian Railways is also working on a proposal to acquire modern electrical EMU train sets which will have a good average speed thereby saving travel time substantially. Besides above-mentioned measures, the Ministry has also announced the introduction of faster train services like TEJAS which requires minimal technological inputs and aims at attaining speeds above 130 kmph.

Railway Minister Shri Suresh Prabhu said that Mumbai-Ahmedabad high-speed rail corridor to be completed in six years and fare will be less than airfare. Mumbai – Ahmedabad high-speed rail corridor will help to reach Ahmedabad from Mumbai in two hours.   The high-speed bullet train is expected to cover 508 km between Mumbai and Ahmedabad in about two hours, running at a maximum speed of 350 kmph and operating speed of 320 kmph. At present, Duronto Express takes about seven hours to cover the distance between Ahmedabad and Mumbai.   The high-speed rail project has been sanctioned with technical and financial assistance from the government of Japan. Joint feasibility study of the project has already been done by the Japanese International Agency.

India and Japan signed the agreement for the Bullet Train project. Cabinet already cleared a $14.7 billion Japanese proposal to build the country’s first bullet train line. The agreement is for high – speed rail for Bullet train between the Financial Capital of India, Mumbai and Ahmedabad, in the state of Gujarat. The total estimate of the project is 98000 Cr Indian Rupees. Normally the travelling time of 505 km is eight hours between both the places but the bullet train will cut the journey time to just three hours.   Bullet Trains will revolutionise Indian Railways and will become the engine of economic transformation in India. It is a package of twelve billion dollars and technical assistance on easy term. The bullet trains project railways plan several years ago.

During the Indian rail budget, 2014 – 2015 Indian railways seriously discuss the Super Fast bullet trains and allocate some serious money to implement this project.   The current movement is quite appreciatable and we are getting some assurance to the success of Faster train travel movement across the country. Once this kind of trains will introduce to link across the country everybody can travel from Kashmir to Kanyakumari very easily. We are expecting this will do railways soon after the success of this project. This kind of travel system not only reduced the time between different location but also get a chance to work on a long distance.